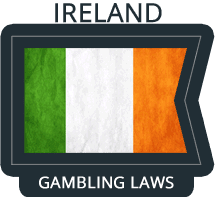 Before engaging in any type of gambling entertainment in Ireland, it is important to understand the laws and how their legal system works. Before 1922, illegal gambling activities ran rampant across Ireland since the Brit’s had no viable way of policing the matter. Today, Irish gambling laws date back to 1926, a few years after the country was awarded its independence from Britain. Over the years many laws have changed, and now new laws have been enacted. We created this page to serve as a guide to our readers to better understand Ireland’s gambling laws and how the industry is currently regulated.

Is Gambling Legal In Ireland?

Yes, most forms of gambling are now legal in Ireland. Casinos have been considered illegal since the Gaming and Lotteries Act of 1956 but because of a legal loophole, Irish casinos could operate if they were membership based. While this greatly affected the size of the casinos, today there are multiple casinos spread throughout Ireland. Most of the casino action lies in the capital city of Dublin, where you will find the heaviest concentration of people and casinos. Other areas like Cork and Limerick are likely to house 1 or maybe 2 casinos. It wasn’t until 2013 when the Irish Control Bill was passed that casinos became legal without membership. The Irish Control Bill has yet to be enacted but it passed the house and lawmakers are currently perfecting the regulation system and the bill is expected to be enacted in 2018.

Forms Of Legal Gambling In Ireland

In Ireland, there are several forms of legal gambling operations that residents can play in casino clubs, the racetracks and bet shops. The following forms are legal to Irish residents.

Yes, the Betting Act of 2015 made online gambling legal in Ireland when a proper license is acquired. Regardless of where entities are located or if they are operating online or not, conducting business in Ireland requires an Irish license and taxation. There are 3 licenses offered by the Irish government; a license for retail bookmakers, an operator’s license for remote betting offered to Irish players and a license for operators who facilitate Irish customers placing bets. Since the Betting Act of 2015 was enacted, residents are legally allowed to participate in the following forms of online wagering.

Who Regulates Gambling In Ireland?

As it stands now the following agencies regulate all gambling operations in Ireland. When the Gambling Control Bill has finally enacted the framework for regulation will change.

18, is the legal gambling age in Ireland. While there is at least 1 membership casino that requires a minimum age of 21, the national age is 18. Online wagering sites will usually accept Irish residents over the age of 18.

Illegal gambling operations have taken place in Ireland since gambling was first regulated under English rule in the 17th century. While the English could not police the illegal activities very well it was usually left up to the landlords who were more concerned with making money than condoning the illegal activities. Illegal gambling was so rampant that when Ireland got their independence in 1922 they immediately wrote legislature in the form of the 1926 Betting Act. The 1926 Betting act is now known as the first government regulation of gambling in the countries history. Horse betting had been legal for many years but after the legislation was passed bookies had to obtain a license before they were legally able to accept horse track bets.

Do I Need To Pay Taxes On My Online Winnings?

For the most part, most winnings from casinos, lotteries, and sports betting operations are not subject to Ireland’s capital tax for recreational gambling, but if the Irish government deems someone as a trader then their income can be taxed.

Any Legal Gambling Reforms Planned For The Near Future?